Skip to content
Home/Articles, Excel Tutorial, Power Query, Presentation in English, Training, Videos/Dealing with dates prior to 1900 in Excel with Power Query
Previous Next

Dealing with dates prior to 1900 in Excel with Power Query

If you need to work with dates prior to 1900 in Excel, you may expect a few tough challenges. Microsoft Excel date functions can only use dates between January 1, 1900 and December 31, 9999. For dates in this range, Excel stores them as a date serial number, where

Oops! Not so fast! Excel mistakenly considers 1900 as a leap year, which was not the case, so Excel stores December 31, 1900 as date serial number 366. This is a known issue, and you can read here (why this error exists and Microsoft chooses not to fix it.)

The picture below shows how Excel reacts if we format column A cells as Text and leave column B cells with General format, and then type the same date strings in both columns: 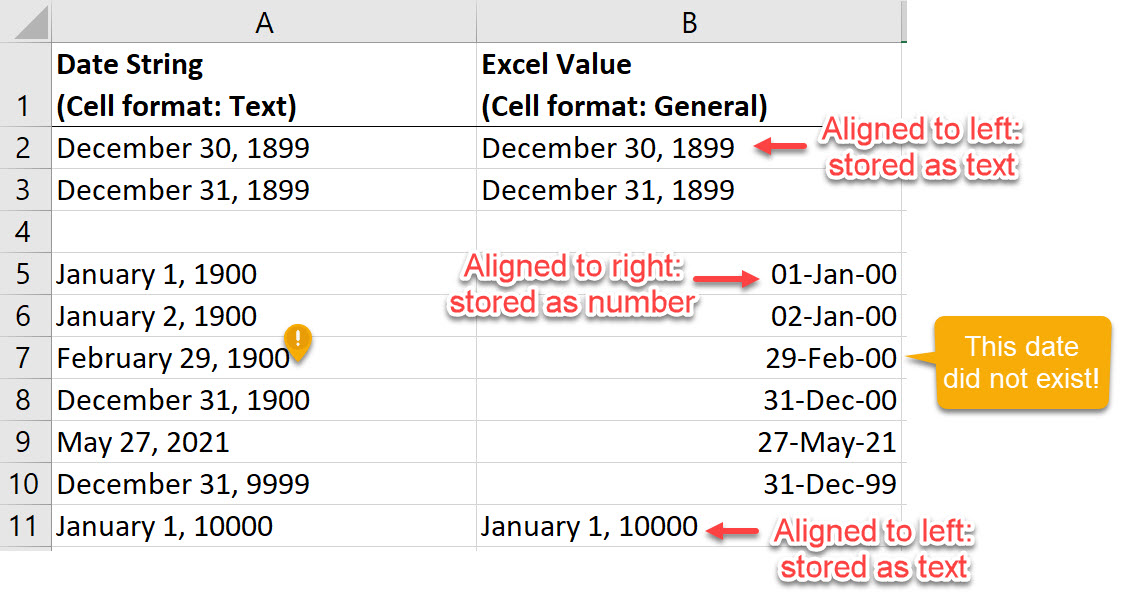 Logic tells us that any date before January 1, 1900 should be assigned a negative serial number, but unfortunately, Excel does not do that. Any dates before January 1, 1900 or after December 31, 9999 will be stored and displayed as Text by Excel, which does not allow to make any calculations with them or sort them. Therefore, calculating ages or duration intervals between two dates where at least one of those dates is outside the range January 1, 1900 – December 31, 9999 is not a straightforward task in Excel. It can be accomplished only with VBA or creative formulas.

The picture below shows how Excel reacts if we format column D cells as Text and column E cells as custom Short Date format, and then type the same numbers in both columns: 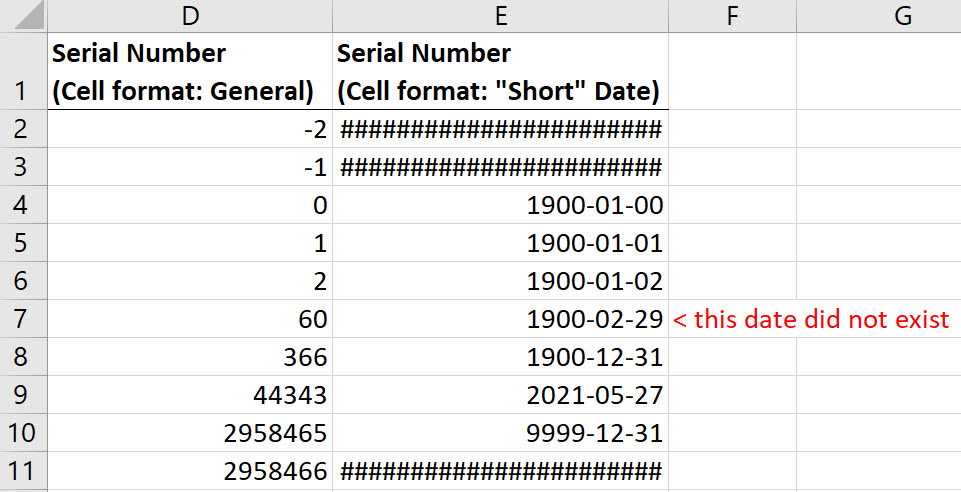 I recently went through the exercise of importing from a web page data about the United States presidencies, using Power Query to determine the total duration in days of each presidency. The data looks like this: 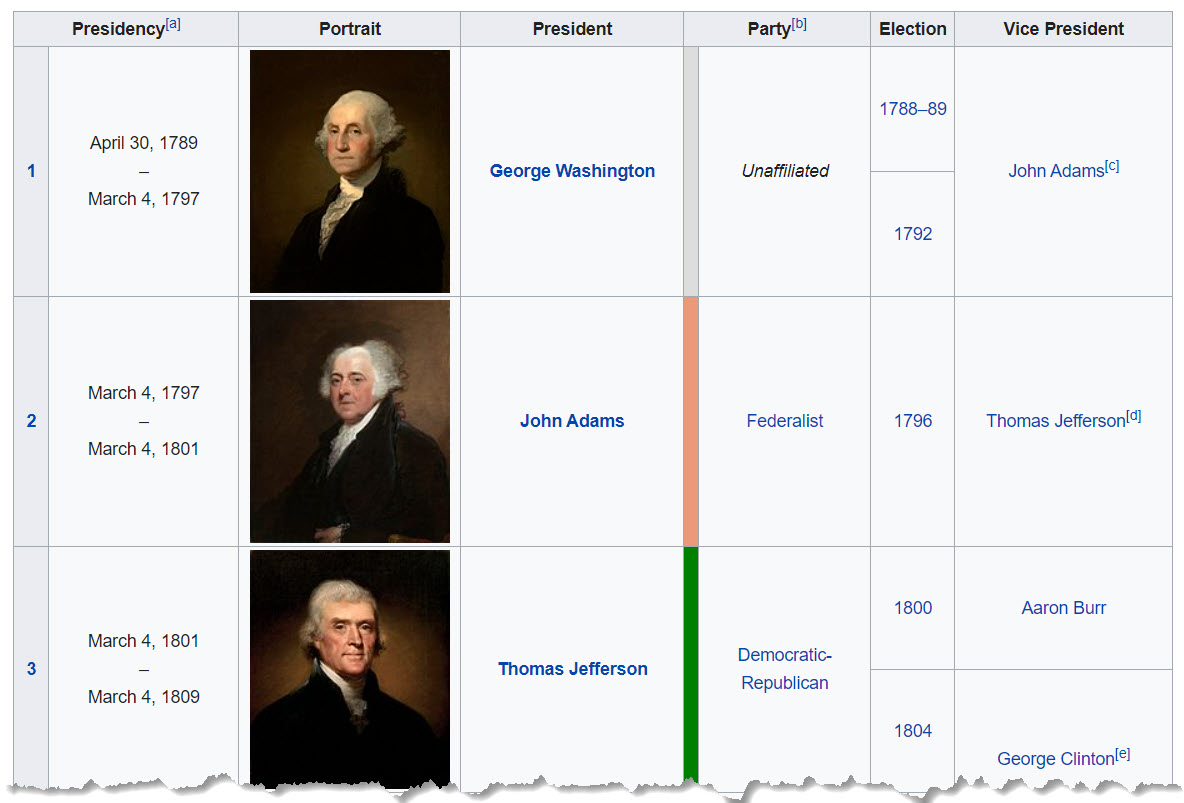 Each presidency’s start and end dates are provided in the same cell, but that is nothing that Power Query cannot handle quite easily. Power Query imports the dates as Text data type, and then we can separate the two dates for each presidency in separate columns, getting the following: 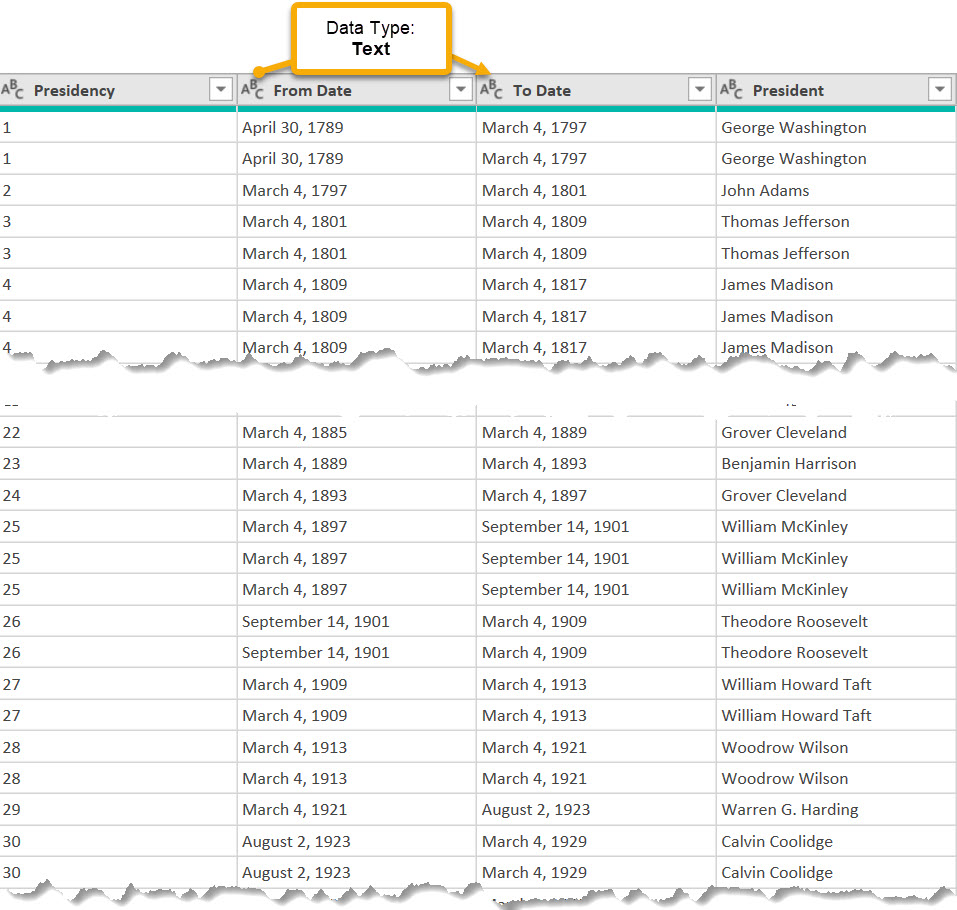 When we convert the data type of the two columns to date, Power Query has no issues recognizing dates before 1900 or calculating the difference between the presidency starting and end dates. 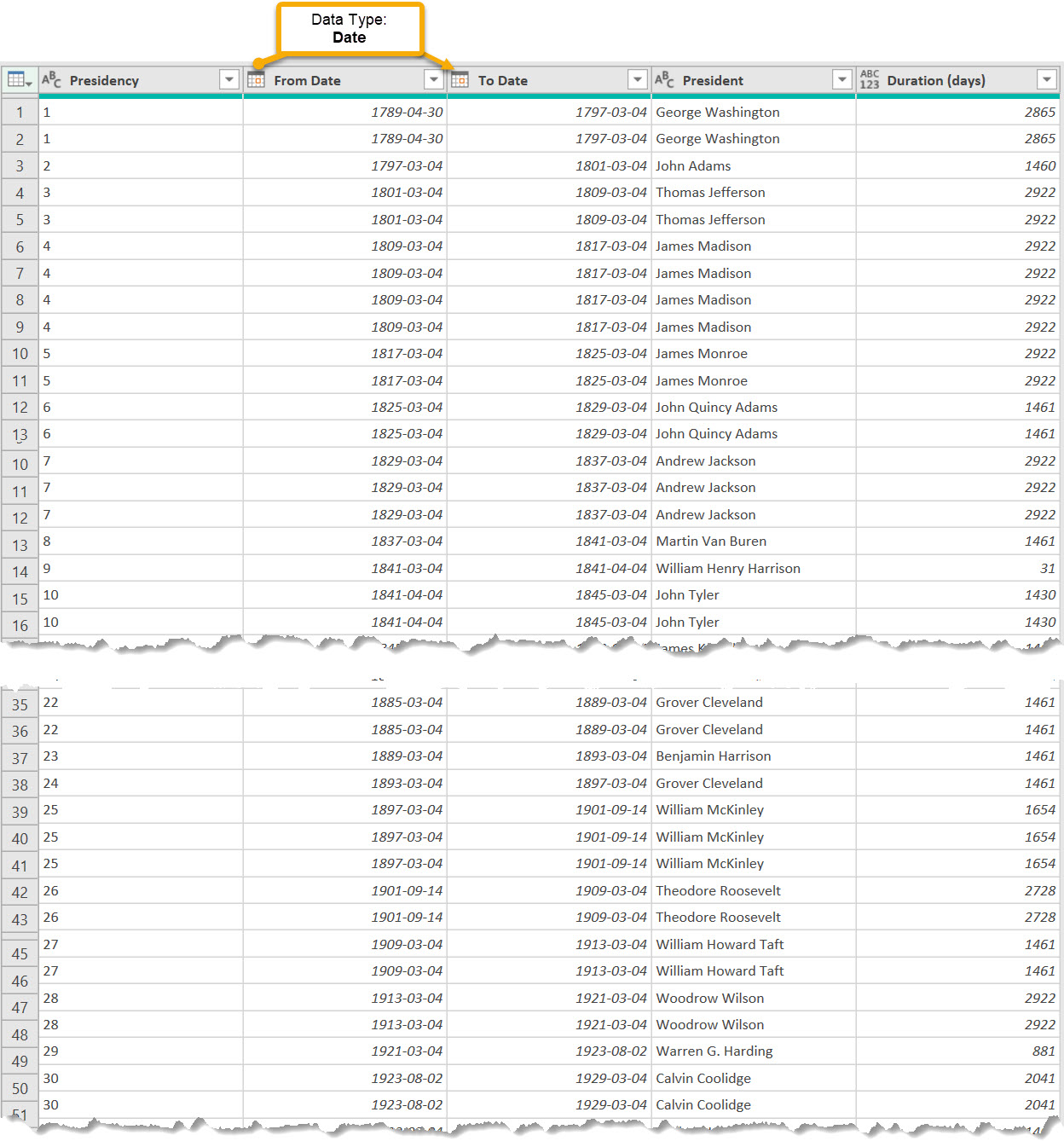 So, if we need to perform calculations with dates before January 1, 1900 in Excel, Power Query is probably the easiest method to use. Besides, the M language offers a fantastic array of functions to work with dates, time values and durations. It is an amazing world of possibilities!

There is a “gotcha,” though: The calculation results can be imported into Excel as numbers as long as they are not dates prior to 1900. Any dates in that range need to be converted to the data type text in Power Query before loading the data into Excel, or Excel will not recognize them. 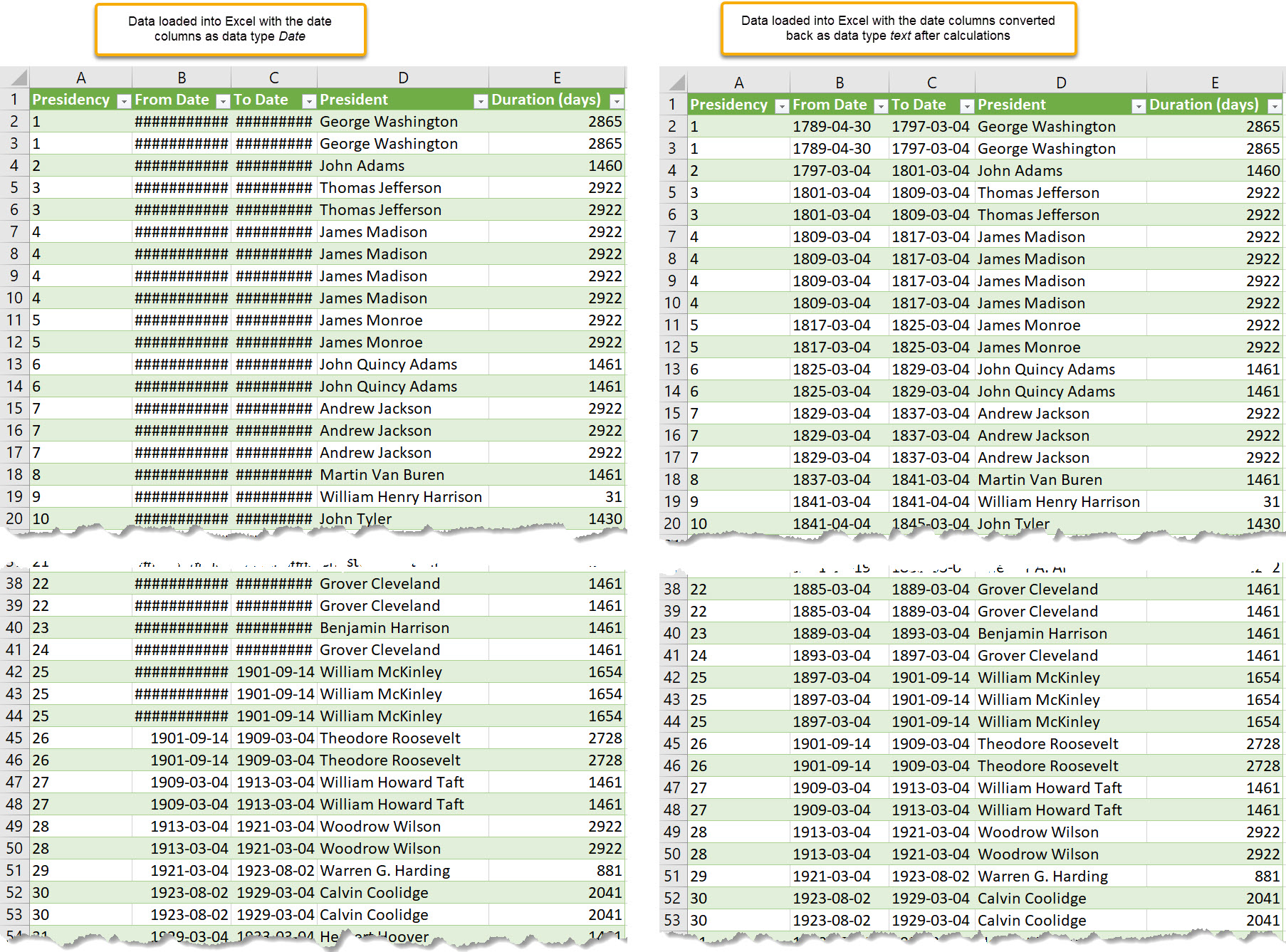 The process of dealing with dates with Power Query looks pretty straightforward in the example above. However, if you need to work with dates prior to 1900, there is a lot more to be aware of.

If we load into Power Query the dates we had entered in Excel as Text at the beginning of this post, this is what happens: 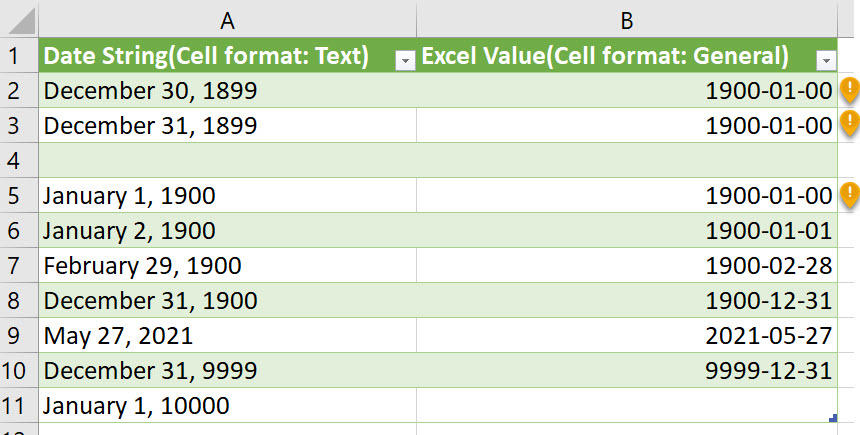 If we load into Power Query the dates we had entered in Excel as serial numbers  at the beginning of this post, this is what happens: